Curved-screen monitors are slowly gaining traction in the market. The LG 34UC87C is one of the 34-inch monsters with an ultrawide curved screen that brings captivating panoramic viewing to the masses. This massive monitor uses In-Plane Switching (IPS) panel that’s superior when it comes to wide viewing angles with rich colors throughout. It’s  clearly one of our top selection for ultrawide monitors. 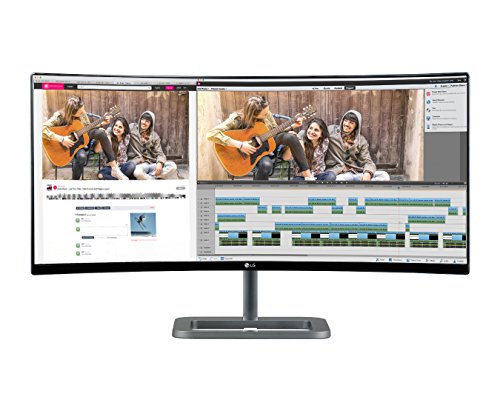 This modestly curved 34-inch WQHD monitor has 3440×1440 maximum resolution with 21:9 aspect ratio.  The screen has anti-glare hard coating to reduce annoying reflections when you use the monitor in a well-lit room. With its 5.000.000:1 contrast ratio, this monitor is able to reproduce deep blacks and clear whites.

The IPS panel used here covers 99% of the sRGB color spectrum, and screen brightness is rated at 300 cd/m2.  The 60Hz refresh rate and 5ms response time are not shabby at all. LG claims 178 degrees of horizontal and vertical viewing angles, which is pretty standard for IPS panels.

Measuring 35.6 x 6.4 x 20.2 inches, this monitor weighs a whopping 17.6 pounds without the stand and 22 with the stand.  Standard VESA mounting screw holes on the back provide excellent support for any kind of desk or wall-mounted monitor arm.

You don’t get much when it comes to connectivity with this monitor. You only get 2x HDMI, 2x USB, 1x USB upstream, 1x DisplayPort, and a headphone jack. That’s it.

LG’s simplistic design is certainly pleasing to the eyes. The top and side bezels are about 3/8-inches thick. The bottom bezel is thicker, but with only a small LG logo on the center, it’s far from distracting.

The front part of the display is clean without any buttons, physical or capacitive. The power button is located at the back, next to the ports. At the bottom of the screen is a joystick that you can use to access the menus. It also can act as a power button. The joystick is tiny. It’s more like a Trackpoint you’ll find on IBM/Lenovo laptops. Using it and navigating the menus will take some time to get used to.

Accompanying the display is a heavy-duty stand. It’s a vertical round gray bar with hollowed rounded rectangle as feet. The silver and black dual tone give it a professional look. The stand has 140mm of height adjustment, -5 to 15 degrees of tilt, but no swiveling. If you want to rotate the screen, you have to rotate the stand too.

There are 2x 7-Watt speakers built in the 34UC87C. The sound quality is nothing to write home about, but they’re there if you don’t want to clutter your desktop with speakers. Plugging in your headphone on the audio jack is a better option. Still, you definitely need a dedicated sound system for the best audio experience.

All the ports are located on the back. Note that those USB ports only put out 100 mAh. If you’re thinking about charging your mobile device there, be aware that it will be painfully slow.

The lack of Thunderbolt on this monitor may irk some professionals who love their Macs. Even though Thunderbolt uses the same tech as DisplayPort, using Thunderbolt to DisplayPort adapter sometimes give that weird aberration. Plugging a cable from the mini DisplayPort directly to the Thunderbolt port can give the same effect too. If you want a monitor with native Thunderbolt support, you should look into LG 34UC87M-B which has two of them.

At 22 pounds, this is certainly no lightweight. You need to be careful if you want to move it around. Too bad LG doesn’t make a carrying handle on the stand. That will make lugging the monitor a lot easier should the need arise.

Up close, the  34UC87C looks massive. With the stand attached, it measures 32.7 x 9.5 x 18.2-inches. This thing will take a lot of desk space. You might want to measure your current desk to see if you have enough room for the monitor, keyboard, mouse pad, and everything else you ought to put on your desk.

If you want the display to run at 60Hz, be sure to use DisplayPort as HDMI can only give you 50Hz. Some say it’s only a problem if your graphic card only supports  HDMI 1.4 and it won’t be a problem for cards that support HDMI 2.0.  HDMI 1.4 can only dole out so much data, so sustaining 3440×1440 resolution at 60Hz is just too much for it. To be on the safe side, just use DisplayPort. If you’re building a new rig, make sure the card of your choice has DisplayPort. Newer cards usually have DisplayPort with HDMI on the side, but check the specs just to be sure.

By the way, you don’t need the most expensive card to run this monitor. Something like NVidia GTX 970 or its AMD Radeon equivalent will do well. You can still get medium-high settings on your games. Photo and video editing software can run smoothly with that card too.

This monitor has been calibrated at the factory, but the colors are a little oversaturated out of the box. A small adjustment to the color profile will fix this in no time. The 34UC87C has clear and brilliant colors. With 178 of viewing angles, the colors remain clear wherever you look.

For any monitor using IPS panel, IPS glow is a given. The severity varies by brand and models, but luckily, the 34UC87C is far from the worst. You will only minor glows on the corners when you have really dark backgrounds on your content, and you’re sitting in a darkened room.

You may not believe it when we say this monitor with its 3440×1440 resolution is a lot better compared to a 4K monitor at 3840×2160. As odd as it is, that is true. The key here is the 21:9 aspect ratio. Have you noticed that in the cinemas the screen is more wide than tall? With an ultrawide, even when your eyes are focusing on the center of the screen, the monitor can still immerse your peripheral vision with sharp images.

The other reason is that 4K content is not catching up as fast as people hoped for. UWQHD content with 21:9 aspect ratio, on the other hand, is more widely available. Top game titles like Battle Field 4 and COD  are capable of scaling up to 3440×1440 without distortion. Other titles with native 21:9 support are Civilization VI, hack mud, Mafia III, The Memory of Eldurim, and Battlerite. Ultrawide is such a perfect aspect ratio for gaming. You can be sure more AAA titles will come up with native support for ultrawide due to its cinematic look.

Movies also transition well from 16:9 to 21:9 when you use the right media player. The ArcSoft TotalMedia Theater 6, for example, lets you experience 16:9 full screen without any distortion. You can also try a Chrome extension called Netflix Ultrawide Display Support to watch Netflix content whether they are originally created for Ultrawide or not.

Gaming is awesome on this monitor. Yes, it’s not 100Hz or even 75Hz monitor, but 60Hz covers the average gamers’ need more than adequately. Once again the 21:9 aspect ratio proves its superiority over 16:9. The super-wide view is just fabulous when you’re running about in a game. You’ll grow to love ultrawide in no time.The panoramic view drags you in, and it ‘ll engross you for hours.

The lack of G-Sync of Freesync might make you worry about screen tearing. The thing is screen tearing is more rampant when you have a 100Hz or 144Hz monitor. On 60Hz, it’s not that big of a problem since your graphic card and monitor will have less chance getting out of sync. If you’re a hardcore gamer who play competitively, there are better options out there with 100 or 144Hz refresh rates coupled with G-Sync of Freesync.

Professionals whose job involves working on complex and large spreadsheet will appreciate the sheer screen real estate an UltraWide QHD has to offer. Displaying 63 rows and 47 columns in Microsoft Excel is easy with the 34UC87C. You can also show two windows side by side simultaneously to improve productivity and get your work completed faster.

Having an ultrawide screen is not the only reason why this monitor is so excellent as a workstation. The other reason is text clarity. When your work is text-heavy, the clear text makes your work so much easier. There are monitors out there that make texts all fuzzy and difficult to read. You’ll start spouting swear words after reading a single paragraph.

Please note that on 3440×1440, the text and numbers on Words and Excel may look too tiny for some. If you feel that reading the small text strains your eyes too much, adjust the resolution accordingly. Or, you can just zoom the document to a level that’s comfortable to your eyes.

Those who do a lot of multimedia work such as photo or video editing will also benefit from the 21:9 aspect ratio. This monitor has over 99% coverage of the sRGB color spectrum. You can rely on it to give highly accurate color.

Now, let’s talk about the curved screen. Is it really better than a flat screen monitor?

The short answer to that is yes. On a flat ultrawide screen, the images on the edges of the screen look skewed especially when you sit close to it. That’s just how things are when they’re at a sharp angle from you.

The subtle curve of the LG 34UC87C makes a world of difference. Due to the less sharp angle, everything on the edges looks more natural. The usefulness of a curved screen diminishes on anything less than 34-inch. This is why you often hear about people complaining that their 29-inch curved monitor is nothing more than a gimmick. On a screen that size, it actually is.

LG Packs the 34UC87C with a handful of features. The first one is the 4-Screen Split feature. Sadly, it’s not user-friendly enough for frequent use. Using the Windows + arrow keys is a lot simpler and easier to arrange multiple windows.

LG’s dual controller is another handy feature this monitor has. It allows you to hook up two computers, but use one keyboard or mouse to control the content from both computers. It’s an excellent feature for collaborative work. It also eliminates the need to transfer all of your files to one computer before working on them.

To reduce eye fatigue, LG employs something called almost-zero flicker technology. The use of the word “almost” blatantly shows that this tech cannot remove flicker in its entirety. However, it is able to reduce it so much that you can stare at the screen longer more comfortably. Considering that some people can get seizures from monitor flickers, this handy feature shouldn’t be taken lightly.

Be informed that this monitor is optimized for Windows 8 and higher. If you’re still using Windows 7, it’s high time for you to upgrade to Windows 8 or 10.

The LG 34UC87C is an awesome curved monitor. It’s packed with features and has excellent image quality. It is an accomplished monitor for gaming, photo/video editing, and word processing alike. The ultrawide screen makes gaming so captivating. Multitasking is a lot better on this monitor too. A single ultrawide display is much better than having two monitors side by side with bezels smack dab in the middle. Those who have used a 21:9 monitor will never want to switch back to a pair of 16:9 monitors.