LG has been supplying their ultrawide LCD panels to various monitor manufacturers. It will be weird if they don’t produce any ultrawide monitors under their own brand. In fact, LG has hundreds of different monitors available in the market. The LG 34UM68-P is one of the super wide monitors in LG’s lineup. Many gamers have been talking about it too. Is it really a good gaming monitor? Let’s find out. 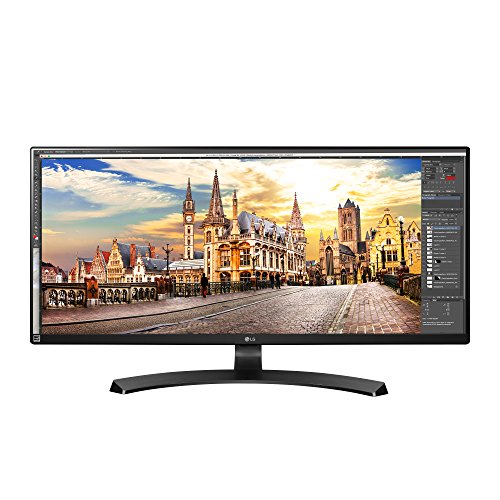 The panel can produce 16.7 million colors (99% of the color spectrum) with 8bit color depth. The screen is finished with non-glossy anti-glare material. Measuring 9.4 x 32.7 x 21.6 –inches, the monitor weighs 17.6 pounds with the stand attached.

Not many I/O ports are available for this monitor. You only get two HDMI 1.4 and one DisplayPort 1.2. That’s all. No DVI, no VGA, and no USB.

In the packaging, there’s a power brick with along with the cable, one HDMI cable, a manual, and an installation CD. This monitor is covered by LG’s one year warranty covering parts and labor.

Some say that seeing one LG monitor is like seeing them all, and that’s true. The 34UM68-P resembles its smaller 29-inch sibling so much. From a distance, it’s hard to tell one apart from another. We’ll leave it up to you to decide whether or not it’s a good thing.

Being the big brother, the LG 34UM68-P looks huge. After a while, you’ll realize that it is huge. Sit three feet in front of it, and it still looks huge. If you’re moving up from a 29-inch monitor with 16:9 aspect ratio, you’ll notice just how overly wide this thing is.

LG did the right thing with the anti-glare coating. It’s matte, and when you look from the front, the panel doesn’t show any obnoxious reflection in a well-lit room. The top and side bezels are thin, but the glossy plastic used is a fingerprint and dust magnet. The back portion of the screen is covered in the same glossy material. It will accumulate dust in no time along with fingerprints when moving the monitor about. Those who care about how their rigs look should keep a note to clean it once a day.

Right under the LG logo on the front bezel, there’s a joystick button that you use to bring up the OSD menus. It also functions as the power button. The location of the button keeps the rest of the monitor appear clean without too may control buttons taking up space. Being on the front side, it is easy to reach whenever you need to play with the settings.

This monitor has a sturdy stand. It’s only made of plastic, but it feels like the good kind of plastic. It is only capable of height and tilt adjustments. There’s no swiveling action here. Rotating the display means rotating the whole thing. It’s just a minor convenience since most people only need tilt and height adjustments to get a comfortable viewing position.  Adjusting both the height and tilt feels smooth. You don’t need to exert much force to do it.

The base is made of brushed aluminum and features LG’s design language that’s called the Arcline. It is pleasant in both looks and feels. The huge stand and the curvy base keep the monitor stable while being showy at the same time.

Moving on to the backside, there isn’t much to be said. All the ports are located on the left-hand side of the monitor. With only five of them there, the back does look a bit barren.

Believe it or not, but there’s a pair of built-in speakers on this monitor. They’re down-firing, and the quality is pathetic. Take our advice and use a dedicated sound system hooked to your PC, laptop, or console to get a better audio experience. You can use the audio jack and plug in your trusty pair of headsets.

Overall, the LG 34UM68-P has good build quality. It doesn’t look or feel cheap. It will make a nice addition to anyone’s gaming rig.

The stand and base come in parts. To put them together just snap on the base to the stand, then mount the stand to the back of the monitor. You can do it swiftly. Just use four screws to set it in the VESA 100x100mm mounting point. With the standard mounting point, you can also use any monitor mounting solution in the market.

We should warn you that this is a massive monitor. Better check your desk’s measurements again to see if it’s wide enough.

LG only put an HDMI cable in the package and no DisplayPort. It may be LG’s idea to keep the price down. It’s an inconvenience, but it’s not even close to being a deal breaker. It just means buyers are free to select whatever DP cable of their choice. A DP cable costs about ten bucks, and it’s easy to find in any electronic store these days.

The DisplayPort available here is only v1.2. That will be a huge problem for a 34-inch monitor with 3440×1440 resolution. But the LG34UM68-P is only 2560×1080, so a DisplayPort v1.2 is sufficient to get the job done. The rather low resolution is also beneficial in terms of hardware required to drive the monitor. If you’re using an NVidia GTX 980 or a Radeon R9 380 in your rig, sliding all of the game settings to the max is very much possible.

A plastic clip sort-of-thing is included in the package. Snap it on the stand, and it will act as a cable management. Route all the power and input cables through it to get a tidier desk.

Once you plug in the power adapter and input cable (or cables if you want to use the PIP feature), you can press the joystick button under the LG logo on the front to start up the monitor. Yes, that joystick button also acts as the power button. Pressing the button again brings up the OSD menu.

LG’s way of arranging the menus and sub-menus is intuitive. You don’t need to consult the useless piece of paper LG dubbed as the user manual to play with the settings.

Please note that this monitor defaults to 60Hz refresh rate. To crank it up to 75Hz, go to Display Settings and manually set the refresh rate to 75Hz. This refresh rate is supported whether you’re using DisplayPort or HDMI.

As far as image quality goes, this monitor can deliver it superbly. It’s already spot on right out of the box. Colors are vibrant with excellent contrasts. The blacks and whites are fantastic. Texts look sharp too.

Due to its massive size, you’ll notice a bit of color shift at the left and right edges of the screen. It’s barely noticeable since an IPS panel inherently has great viewing angles.

At 9.4 x 32.7 x 21.6 –inches, the LG 34UM68-P isn’t much taller than the average 27-inch monitors. If your current setup includes a 27-inch monitor, upgrading to this monitor won’t feel awkward when it comes to vertical viewing area.

People who are interested in this monitor are usually gamers wanting to take a dip into the ultrawide world without spending too much money. And you know what? Any gamers will be pleased with this monitor.

The 34-inch ultrawide screen provides an immersive gaming experience. Not as much as a curved 34-inch monitor, but it is a level above typical monitors with 16:9 aspect ratio.

At 75Hz refresh rate, everything looks fluid.  Since the resolution is “only” 2560×1080, you don’t need a high-end card to push the monitor to the best of its abilities.

The 5ms response time is fast enough for any fast-paced game you want to play. There’s no noticeable input lag, and you can remain competitive while playing your favorite games.

With AMD’s FreeSync, your gaming hours won’t be interrupted with stutters and screen tearing. FreeSync works by syncing the monitor’s refresh rates according to the graphic card’s output. This way the monitor won’t try to draw multiple frames at once producing that choppy artifact. FreeSync only works when connecting the monitor using a DisplayPort cable, so if you want to hook up your old gaming console through HDMI, you just have to suck it up.

By the way, when we say gaming, it doesn’t refer to PC gaming only. If you love consoles, this monitor can give the same immersive experience. Doesn’t matter if it’s an XBox or PlayStation. Your games will look better on this.

The 2560×1080 resolution, while awesome for gaming, falls short for any serious photo editing works. Sit two and a half feet from it, and you can already see the pixels. People who have been spoiled by the Macbook Pro’s Retina Display will shout about how lacking the pixel density is.

Frankly speaking, even the phone and tablets we use daily can beat the 34UM68-P when pixel density is the only criteria. With only 2560×1080 resolution on a 34-inch screen, this monitor comes to 81 pixels per inch (PPI). For your information, the original iPad boasted 132 PPI. Things get even more depressing for the 34UM68-P when we’re talking about newer gadgets and phones. The Samsung S7, for example, blows everyone away with 577 PPI.

Of course, the LG 34UM68-P is not made for pixel peepers. Still, this is a fantastic monitor when your line of work is about writing and editing documents, crunching numbers on spreadsheets, writing lines after lines of code, and things like that. The massive screen real estate allows you to have two application windows side by side and each is big enough to be useful. The good thing about 2560×1080 screen resolution is that the texts don’t look overly tiny. Everything looks nice and crisp. No need to zoom the documents to get a good read when sitting three to four feet away from the screen.

This monitor is also a solid choice for video editing. The super wide display gives plenty of timeline area that makes video editing easier and faster. With such generous screen real-estate, you no longer need to rely on a dual-monitor setup. With this monitor alone, anyone can get their work done more quickly and comfortably without the hassle that comes with setting up two monitors together.

The 34UM69-P doesn’t only have one display mode dedicated to gaming. No Sir, it has three different gaming modes. One for real-time strategy (RTS) and two for first-person shooters (FPS). Will they improve one’s gaming experience? Well, just experiment and see if you like it. It’s all a matter of preference.

Available for download is LG’s OnScreen Control. This software allows you to split the screen easily without having to drag and resize the application windows each time. It’s a highly useful feature that lets you use one monitor with two or three computers at once. With this setup, you can use the same mouse and keyboard to access different systems.

There are eight different split window layouts plus four Picture in Picture layouts.

The different window layouts are 2 Screen, 3 Screen, and 4 Screen. With the 2 Screen layout, the two windows can either be 16:5 or 1:1 ratio.  For the 3 Screen layout, there’s one large application taking half of the screen with the other two take a quarter. The large window can be positioned on the left, right, top, or bottom. The 4 Screen layout only offer a balanced view with each windows taking up a quarter of the screen area.(Balanced). The PIP layouts just set the small window on one of the four corners.

At its current price tag, choosing the LG 34UM68-P is like a no brainer. It’s a fantastic 34-inch monitor that immerses yourself in your favorite games with its 21:9 ultrawide aspect ratio. The 2560×1080 resolution is perfect to play many AAA game titles smoothly without needing an expensive graphic card to push it.

The 21:9 format is the future of gaming and movies, and now is a good time to jump ship to ultrawide. Considering how affordable the LG 34UM68-P is, this big jump won’t require smashing your piggy bank.